Letter to U2 on poverty environment and trade protectionism

Once a year, the topic of international trade protectionism comes round for me to teach, and every time, I tell my student’s this story: - the time when I wrote a letter to U2.
It kind of makes me cringe, but still, I’m proud of my effort, and now I would like to share it on my blog – not to show off me, but show off the issue, and the effort of Bono.


Background
I grew up on a sheep station in the South West of New Zealand, and from an early age was surrounded with (global) economic talk – as much of our products were for the international market. Sometimes the talk turned to how the European farmers were subsidised to produce, and that they were affecting our opportunities.  I knew nothing of this issue of agricultural protectionism, and it’s deep-rooted effects on us, and worse still, on those in developing nations. I was until I studied international economics at my University (Lincoln University) in 1992 that I saw the full extent of it. One of my lecturers even suggested that New Zealand’s economy – which until that time, was built on trade to Europe – went (from being one of the world’s wealthiest economies) downhill due to trade restrictions put on after the UK joined the EEC in 1973. Today New Zealand has moved on, and has diverted trade towards Asia, reducing trade to Europe from 50% in the 70's to 12% today.

What really caught my attention, far from the effect on New Zealand (and the possible demise of our own family farm), was the effect protectionism had, and still has, on developing countries, and the direct effect it has on the environment. This really stirred me. How can these countries develop with no income, income that can only come about from trade?

U2
I had to tell someone; something had to be done about this, it seemed so simple. The media and public didn't seem to follow this 'economic logic'. So who to tell?

Those who know me, know I am a (deeper than most) fan of rock music, and at the time was really into U2 - to say the least.
It came to me, I’ve got to tell U2, they’re the one’s that can do something. They’re out there thinking, and writing on issues such as poverty, and ‘Africa’.
I’ll do it, I’ll write a letter to the band, and I change the way they think. Yes! At least that’s what I thought. At the time  U2 were nearing the end of the 1993 Zooropa tour and would be coming to my town, Christchurch, in a month or two.
And so, with the help of my girlfriend at the time, I set about writing ‘the effects protectionism has on developing countries and the environment’ – for U2. It was very difficult for me. I was not at the time (and still don’t consider myself to be) a great writer. But I gave it a go, knowing that it was the issue that counted.
And here is the letter.
I recall coming up with the ‘band-aid, was just that, a band-aid’ punch line, and hoped it wouldn’t insult or offend. 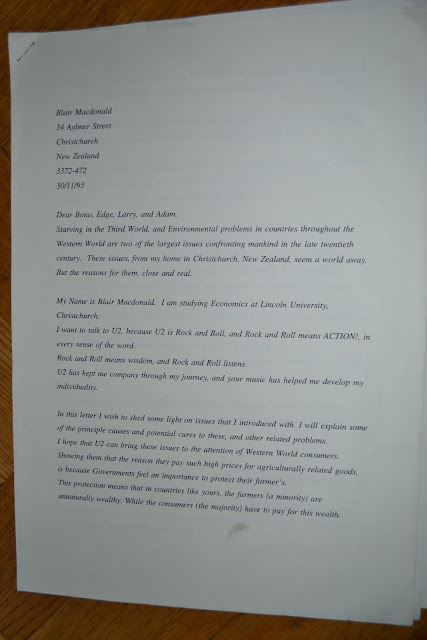 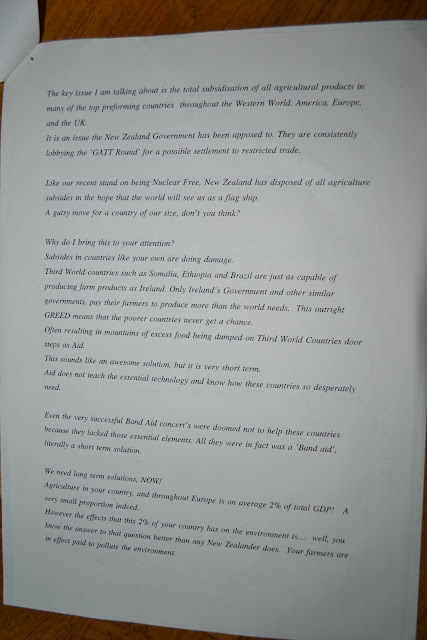 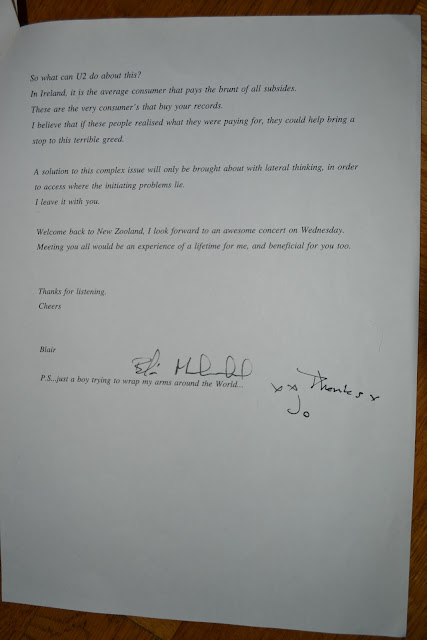 Delivery
So, I packaged up the letters, and then cycled into Christchurch central – to the hotel where I knew they were staying. I wasn’t dressed anything special, riding closes. Not the best strategy.
I entered the hotel, and walked straight up to the reception and I placed the four letters on the counter, in front of the receptionist, (each separately addressed to each member of the band) and kindly asked if he would see that the letters would get to the band.
I remember the receptionist looking at me - I guess based at the way I was dressed, and the excitement I was showing - and he said:  ‘Do you really think I’m going to do that?’
I said, ‘Please do. Please help me -  they're not your usual fan letter, it's important stuff, and I’ve worked hard on them, and I think the band would like to read it.’
He said, ‘I’ll see what I can do.’
I left the letters, just hoping that he would pass them on. That done, I wanted out.  My bubble had been popped. I felt like a fool. Humiliated. I just wanted to forget the whole thing.

The concert was fantastic. We were right up front. I soon buried the memory, and then after got on with my life, tried to forget the stupid thing (maybe?) I'd done.

Maybe sometimes you get it right.
It was years later, when I was living in Sweden, when I noticed, while in a local bookshop, Bono! on the front-cover of the latest Time magazine, and Bono was on a mission! What?!

I bought the magazine (shown below), and with a tear in my eye, and a smile on my face, I reed the feature article – quietly knowing inside, that even if they didn’t get my letter to them (only four people will really ever know that, right?) at least I put my money on the right horse(s).

Bono
For me Bono's stand on poverty, and the 'make poverty history' stands-out as one of the greatest responses anyone has every done.

It is my thoughts that both Bono and Bob Geldof have been robbed of a Nobel Prize, they are both deserving – as they both changed the world, opened our eyes over the years, to the misery of others. It seems the likes of the European Union (yes, the same European Union, with the damaging Common Agricultural Policy), that have beaten them to it.
Africa - my thought's

In an earlier blog entry, I made the point that trade protectionism should also be recognised as been part cause (not withstanding central banking) and solution, to the current 'credit' plight that the developed world find themselves in.

I find it a little ironic that as the economies of Africa are finally growing – for the first time in some fifty odd years – that next to none of this progress can be attributed to the developed (rich) countries. Not for all the aid, the money, words, and wishes they ever threw at them.  Instead, it has come from one of the fundamental economic forces; it due to another developing country trading with them – it is due (mostly) to China.

The poverty in Africa will, as long as the EU protect, stand as the failure of the EU, and now that the EU is basically bust!, the question must be asked, who will save them, the EU that is? Who is going to, not 'bail them out', but 'trade them out'. America? No, they're spent too. They are going to have to turn to the developing world, there's the opportunity.But as long as the EU doesn't buy their food, or value-added finished goods, at the market price - and in light of African-EU trade history - then Africa and the developing countries should rightly question whether or not to buy from European (trucks and phones). But instead, buy Chinese (trucks and phones).

The last word
Today my interest is in fractals, I see this is where I can make a difference, and this is my blog. One of the most central fractal attractors in the living universe, and central to life, is trade. Its occurs at all levels, scales and times. To mess with trade is to create misery, misery for both parties - it is bullying.

There are three things that I feel I got right with writing that early letter: the issue; the right people to write to; and lastly, I chose the right career, teaching, one where I can make a small difference.