I have now published my updated theory of the atmosphere. Quantum Mechanics and Raman Spectroscopy Refute Greenhouse Theory and The Greenhouse Gases and Infrared Radiation Misconceived by Thermoelectric Transducers I have placed the following comment on Professor Brian Cox's Facebook sight in response to the following clip; I look forward to review and or feedback. Professor Cox, yes those laws 'repeat all over the universe', but there are two gaseous molecules that - by 'our' understanding of greenhouse theory - contradict these laws, nitrogen and oxygen - together making up some 99% of Earths atmosphere. In gre enhouse theory N2 and O2 are assumed, as if by law, not to absorb or emit radiation, but this, if true, is in violation of both thermodynamics and quantum mechanics where everything above absolute zero and with spectra lines (vibration modes) vibrates and radiates; but conversely, if found wrong of mistaken, would pose a violation of greenhouse th
4 comments
Read more 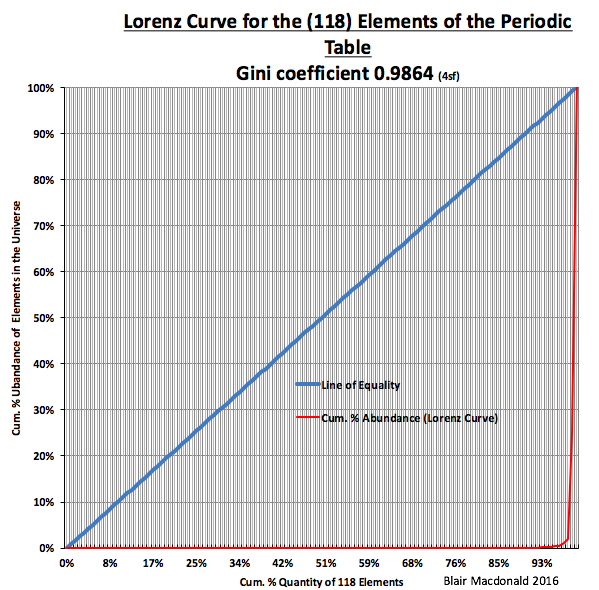 Lorenz Curve of the Universe's Elements Update May 2017 I have published a working paper on the Lorenz curve being a fractal property at academia.edu . Abstract Global income has increased exponentially over the last two hundred years; while, and at the same time respective Gini coefficients have also increased: this investigation tested whether this pattern is a property of the mathematical geometry termed a fractal attractor. The Koch Snowflake fractal was selected and inverted to best model economic production and growth: all triangle area sizes in the fractal grew with iteration-time from an arbitrary size – growing the total set. Area of the triangle the ‘bits’ represented wealth. Kinematic analysis – velocity and acceleration – was undertaken, and it was noted growing triangles propagate in a sinusoidal spiral. Using Lorenz curve and Gini methods, bit size distribution – for each iteration-time – was graphed. The curves produced matched the regular Lorenz curve sh
Post a Comment
Read more

Blair Macdonald   A deductive approach to special heat trapping property of CO2 would suggest CO2 should reveal its property where ever it is. It should be a Law of science: known, understand and not a discussion or controversy - like H2O isn't. I have for many years evaluated CO2 for this special property and have found no(!) examples of this special property of CO2. CO2 is next to everywhere, it does not explain or feature in literature where it should. The likes of: cloud formation, met theory, avalanche cause and theory (it is some 5000ppmv in the snowpack), plate tectonics (CO2 mostly subducts) respiration theory explaining how air is warmed from the nose to the lungs from extreme cold temperatures when the CO2 concentrations in the nose are some 45,000ppmv). None! of these make a mention of CO2's apparent special heat trapping property, Venus is not hot because of CO2 alone, it has a 90bar atmosphere pressure, that is enough to explain extreme and unusual temperatu
Post a Comment
Read more

I have now published my updated theory of the atmosphere.  Augmenting 19th Century Thermoelectric Greenhouse Theory with 20th Century Quantum Mechanics Raman Spectroscopy: Towards a Coherent Radiation Theory of the Atmosphere The following is a dialog with scientists to do with  my thermoelectric interpretation of the atmosphere.  The first is from a dialog from facebook.  I am showing this to show the logical fallacies scientists  are using, but they are not listening to my arguments. But I am learning from their dialogs because they take me everywhere except on the issue, the claim - that thermoelectrics must be understood to understand the atmosphere. These dialogs are a typical response I get from scientists. Blair Macdonald   How would a climate like Copernicus, Galileo or Darwin be accepted today? What would happen - just say as a thought experiment - CO2 and all the GHGs were found to be totally benign due to a mistake in the assumptions ( and the key premise)That
Post a Comment
Read more
More posts