Beryllium 10, my word for the week; and I found it where it should be, at the end of the last ice age.

We now know the mechanism of the connection between (Galileo's) sunspots and short-term and long-term climate, and of course, the weather. The mechanism is cosmic rays, and the modulation of them by the Sun's magnetic (sunspot) activity. When the sun is at solar minima we are not protected from the showering of these high energy subatomic particles; and they help, as a consequence, seed cloud nuclei leading to more cloud, more precipitation, and eventually colder (different from place to place, it can be hotter in places).
Laboratory experiments have demonstrated this mechanism. When the sun is active, as it has been over the last 100 years (coincidence?!), we are shielded from them; but, before then, since the 14th Century, the cosmic rays were more - as measured by isotope Carbon 14 - and as a consequence, it was 'little ice age' cold, with extensive global glacier growth and around misery to all our ancestors, we were hungry and cold.
What I wanted to know - something I couldn't find anything on until now - was what were the cosmic rays doing during the last ice age, particularly the end of it; what is known as the 'Younger Dryas'?
It is an incredible period of time: the ice came and went within decades (kilometres thick ice!), by rising and falling temperature by some 10 degrees C. Today it is claimed - surprise surprise, everything is - it was caused by CO2 and methane changes. No way!
So, in this image - from a paper not directly related to climate, but on the megafauna extinction of the same time - we see Beryrillium 10 (10Be) counts back 60,000 years. Beryllium 10 and carbon 14 are produced by cosmic rays in the atmosphere, (10Be lasts longer) and here we have a record of it from the Antarctic Ice core. I think it matches the ins and outs of the last ice age pretty well, and importantly, the end of it. I think it is a smoking gun.
Otherwise, it is well known that by Beryllium 10 we can trace all the climate record, right back to before the Cambrian explosion of life, to the period of snowball Earth, where there was ice at the equator, a planet of ice! It corresponds with Earth's progress through the galaxy, perfectly matching its ice age history ( which was only 20% ice of that time by the way; 80% ice-free at the poles). 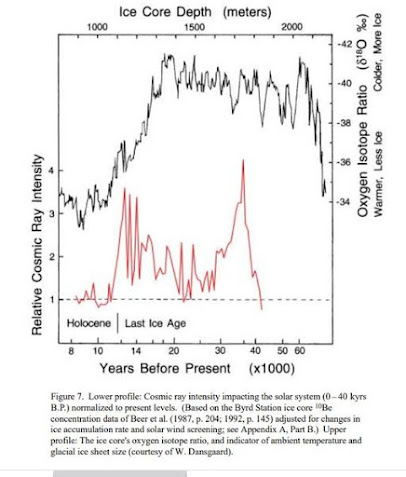 Reference: Evidence for a Global Warming at the Termination I Boundary and Its Possible Cosmic Dust Cause
My aim in all this is to get the father of Cosmo-climatology, Henrik Svensmark, the Nobel Prize he deserves. It is the greatest science of our time what he has uncovered, bringing together cosmology, climatology with particle physics.
I am currently writing up my experiment proposal to refute greenhouse theory and expose the use of Raman Spectroscopy in it, and as I said to Henrik in person, if I'm right, the only theory is yours.
Keep warm.