Marginalism, and Marginal Analysis : derived from the fractal (?)


Update May 2017
This is by far my best idea; I have written it up in a working paper at my academia.edu and vixra, and named it:  Quantum Mechanics, Information and Knowledge, all Aspects of Fractal Geometry and Revealed in an Understanding of Marginal Economics.
I shall post the Abstract, followed by the original post, followed by the paper. I hope to have some collaborate and review my work in time.


Original Post
Intro
For some time now I have pondered on the fractal, particularly the development the Koch Snowflake fractal, (seen below), I have noticed how it uncannily demonstrates many of the key features of economic theory.
Could it be that the economy - as we experience it - is a fractal? Is it that the fractal can be understood as an economy?
I am now confident, after doing the following analysis of the (Koch Snowflake) fractal that fractal geometry is the foundation of neoclassical economics and our reality.
The following is the first in a series of insights I have found within the fractal:

To show that the fractal demonstrates marginal utility (or benefit) I substituted area for utility, and then analysed the change in area over the development of the Koch Snowflake fractal - from a triangle (iteration 1 below), to the complete shape of the snowflake at iteration 4 (below). Shape is usually forms at and around 7 plus or minus 2 iterations: it is at iteration 4 (below) because of its size and relative thickness of line.

Once a rule -  in this case new triangles - is set in action, and allowed to iterate (repeat) step by step, it will go on to eventually form a snowflake.  After iteration 4, the shape will set at what I term fractal equilibrium: no more iterations will change the shape after this iteration - assuming a static viewers perspective, ie no zooming.

If one were to continue the iterations beyond the point of fractal equilibrium (iteration 4 in the figure above and iteration 6 in the animation above) the computer generating the pattern would soon crash: the effort (cost) would multiply while the extra benefit to the viewer - in terms of the shape – would fall close to, but never equaling, zero.
Take the time to look at this webpage http://mathforum.org/mathimages/index.php/Koch_Curve where you can experience the fill working of the Koch Curve first hand.

Marginal Analysis: Method.
I analysed the growth of the Koch Snowflake using marginal analysis (a method found in any basic economic textbook) which looks at (in this case) the extra 'area' added - iteration by iteration.

Working from internet sources I constructed a table showing the area progression of the curve - iteration after iteration:

Taking s as the side length, the original triangle area is . The side length of each successive small triangle is 1/3 of those in the previous iteration; because the area of the added triangles is proportional to the square of its side length, the area of each triangle added in the nth step is 1/9th of that in the (n-1)th step. In each iteration after the first, 4 times as many triangles are added as in the previous iteration; because the first iteration adds 3 triangles, the nth iteration will add triangles. Combining these two formulae gives the iteration formula: 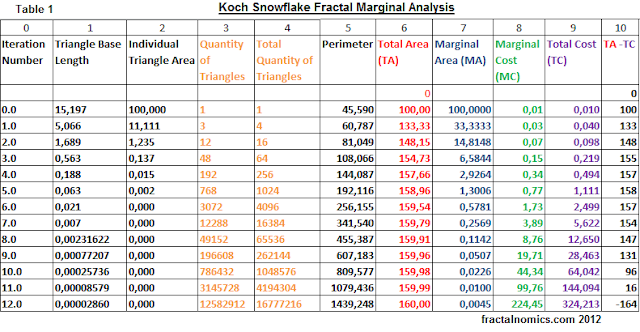 The Fractal Total and Marginal Area Curves
Fig 1. shows the total area (TA) and marginal area (MA) at each iteration.
Notice, from the start, that Fig.1 resembles any marginal utility diagram found in any elementary economic text books. 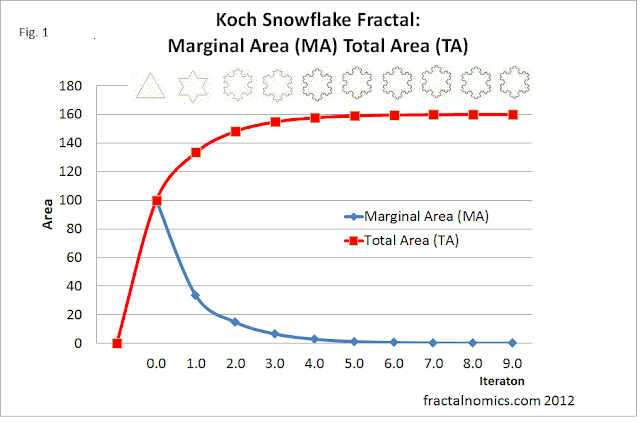 Fig 1. is derived from the fractal - not from any (fictitious) made up numbers, as in text books. All fractals - whether computer generated or not - will chart as Fig 1.

Figure 4-1 above shows how the fractal analysis is similar if not the same as a typical economics text book diagram: marginal utility reference.
The MA curve is a 'Power law' function, and that it demonstrates Pareto distribution - the 80/20 rule.
As the total area of the Koch Snowflake increases, after each iteration, the marginal or extra area (also) diminishes.
The fractal is the perfect demonstration of diminishing marginal utility; it could be interpreted that diminishing marginal utility is a perfect demonstration of the (universal) fractal - that both are the same thing?
Here are some internet references on marginal utility:
http://www.investopedia.com/university/economics/economics5.asp
http://www.google.se/imgres?


A window into reality:
My fractal-marginal analysis diagram is a snap-shot, taken somewhere (anywhere) in the set: this insight in turn has opened a window of enormous insight into reality, and has led me to the world quantum mechanics. The fractal (above) shows no scale - the numbers assigned are purely arbitrary and serve merely to show the relationship between the total area, 160, and the first triangle area 100. In fact triangles range in size from small, (but never reaching 0), to the infinitely large.
From this early insight (in this blog) I have gone on to unlock the quantum features of the fractal and have recently suggested a direct link between the demand curve and the de Broglie wave function.