By Blair Macdonald on April 22, 2015
Update 2020
I have a new paper: Quantum Mechanics and Raman Spectroscopy Refute Greenhouse Theory

Update May 2017
I am currently writing up a new paper, bringing together everything I know in an improved format.
I have had many discussions with professional scientists, from which I am still positive about my hypothesis.

Update 2016 04 23
While I have had the support of two professors, others have shown absolute dislike to my discoveries. I was in review with a retired professor of chemistry, a climate sceptic, for 1 month, 40 odd email exchanges, and he gave me every logical fallacy in the book, red herrings, and in the end, suggested I made it all up. I have not made this up.

I have posted on a page a transcript of a dialogue I had with some scientists on Facebook. I want to post this to show the fallacies. If I am wrong. Tell me where I am wrong, and if I see I am wrong I will change my claim.
Reinterpreting and Augmenting John Tyndall’s 1859 Greenhouse Gas Experiment with Thermoelectric Theory and Raman Spectroscopy
at: academia.edu/ and  http://vixra.org/abs/1504.0165.

Abstract
Climate science's fundamental premise – assumed by all parties in the great climate debate – says the greenhouse gases – constituting less than 2% of Earth’s atmosphere; first derived by John Tyndall‘s in his 1859 thermopile experiment, and demonstrated graphically today by infrared IR spectroscopy – are special because of their IR (heat) absorbing property. From this, it is – paradoxically – assumed the (remaining 98%) non-greenhouse gases N2 nitrogen and O2 oxygen are non-heat absorbent. This paper reveals, by elementary physics, the (deceptive) role thermopiles play in this paradox. It was found: for a special group substances – all sharing (at least one) electric dipole moment – i.e. CO2, and the other greenhouse gases – thermopiles – via the thermoelectric (Seebeck) effect – generate electricity from the radiated IR. Devices using the thermopile as a detector (e.g. IR spectrographs) discriminate and have misinterpreted IR absorption for anomalies of electricity production – between the sample gases and a control heat source. N2 and O2 were found to have (as all substances) predicted vibrational modes (derived by the Schrodinger quantum equation) at 1556cm-1 and 2330cm-1 respectively – well within the IR range of the EM spectrum and are clearly observed – as expected – with Raman Spectroscopy – IR spectroscopy’s complement instrument. The non-greenhouse gases N2 and O2 are relegated to greenhouse gases, and Earth’s atmospheric thermoelectric spectrum was produced (formally IR spectrum), and was augmented with the Raman observations. It was concluded the said greenhouses gases are not special, but typical; and all substances have thermal absorption properties, as measured by their respective heat capacities.

Figure 10. The Augmented Greenhouse Atmosphere. Combining Thermoelectric spectra with Raman spectral to reveal the complement of atmospheric vibrational modes, and the greenhouse atmosphere of planet Earth. 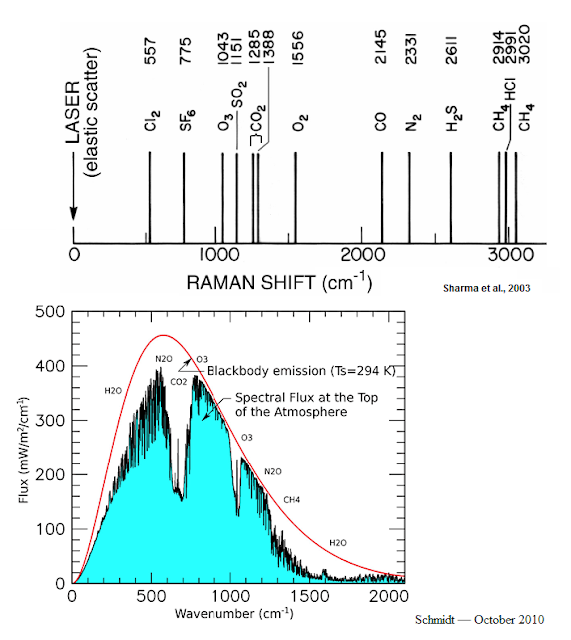